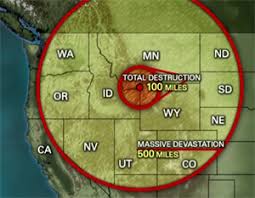 It would explode with a force a thousand times more powerful than the Mount St Helens eruption in 1980. Spewing lava far into the sky, a cloud of plant-killing ash would fan out and dump a layer 10ft deep up to 1,000 miles away.
yellowstone-caldera-super-volcano-wyoming

Two-thirds of the U.S. could become uninhabitable as toxic air sweeps through it, grounding thousands of flights and forcing millions to leave their homes.
This is the nightmare that scientists are predicting could happen if the world’s largest super-volcano erupts for the first time in 600,000 years, as it could do in the near future. Yellowstone National Park’s caldera has erupted three times in the last 2.1million years and researchers monitoring it say we could be in for another eruption.
They said that the super-volcano underneath the Wyoming park has been rising at a record rate since 2004 – its floor has gone up three inches per year for the last three years alone, the fastest rate since records began in 1923.
But hampered by a lack of data they have stopped short of an all-out warning and they are unable to put a date on when the next disaster might take place. When the eruption finally happens it will dwarf the effect of Iceland’s Eyjafjallajökull volcano, which erupted in April last year, causing travel chaos around the world.
The University of Utah’s Bob Smith, an expert in Yellowstone’s volcanism told National Geographic: ‘It’s an extraordinary uplift, because it covers such a large area and the rates are so high. They have also been keeping an eye on a ‘pancake-shaped blob’ of molten rock he size of Los Angeles which was pressed into the volcano some time ago.
But due the extreme conditions it has been hard to work out what exactly is going on down below, leading researchers unable to say with certainty what will happen – or when.
Since the most recent blast 640,000 years ago there have been around 30 smaller eruptions, the most recent of which was 70,000 years ago. They filled the caldera with ash and lava and made the flat landscape that draws thousands of tourists to Yellowstone National Park every year.
‘Clearly some deep source of magma feeds Yellowstone, and since Yellowstone has erupted in the recent geological past, we know that there is magma at shallower depths too,’ said Dan Dzurisin, a Yellowstone expert with the U.S. Geological Survey at Cascades Volcano Observatory in Washington State.
‘There has to be magma in the crust, or we wouldn’t have all the hydrothermal activity that we have.
‘There is so much heat coming out of Yellowstone right now that if it wasn’t being reheated by magma, the whole system would have gone stone cold since the time of the last eruption 70,000 years ago.’

Robert B. Smith, professor of geophysics at the University of Utah, who has led a recent study into the volcano, added: ‘Our best evidence is that the crustal magma chamber is filling with molten rock.
‘But we have no idea how long this process goes on before there either is an eruption or the inflow of molten rock stops and the caldera deflates again’.
The Yellowstone Caldera is one of nature’s most awesome creations and sits atop North America’s largest volcanic field. Its name means ‘cooking pot’ or ‘cauldron’ and it is formed when land collapses following a volcanic explosion.
In Yellowstone, some 400 miles beneath the Earth’s surface is a magma ‘hotspot’ which rises to 30 miles underground before spreading out over an area of 300 miles across. Atop this, but still beneath the surface, sits the slumbering volcano. source – Daily Mail UK

35 Volcanoes Are Erupting At Once Across The Globe – BIRTH PANGS Matt. 24 8

The volcano at Mount Sinabung at Jakarta, Indonesia, erupted six times early Monday, shooting volcanic ash 2,000 meters into the sky. Thousands have been evacuated from the region since the Sinabung volcano began erupting sporadically in September. 5,000 people were evacuated from the area the day before the eruption on Monday, bringing the total number of evacuees to 11,000. There have been no casualties so far. The Sinabung is just one of 35 active, erupting volcanoes in the world, according to a categorized list on Volcano Discovery. Of the 35 currently erupting volcanoes in the world, seven are in Indonesia. Most of Indonesia is situated along the “Ring of Fire” — a horseshoe shaped ring around the Pacific where most earthquakes and volcanic eruptions take place. About 50 to 60 volcanoes erupt during a year. EP